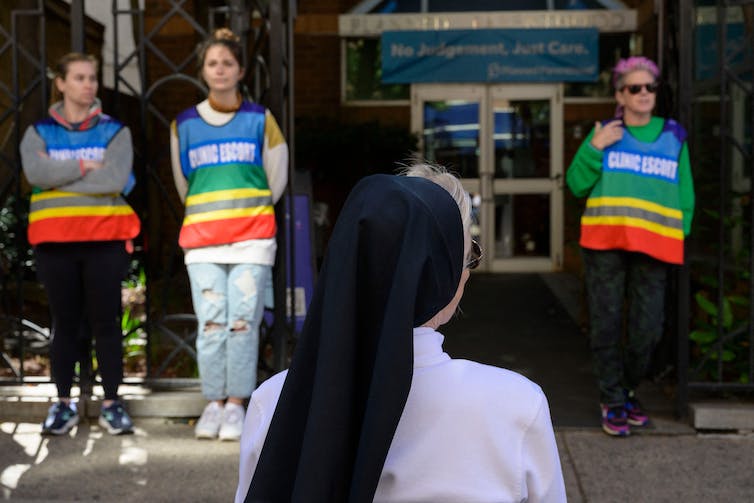 The abortion landscape in the U.S. has been upended over the past five months, as many clinics offering the procedure have closed and people have traveled across state borders to obtain abortions where it remains legal. The percentage of people getting legal abortions has also dropped.

Division over abortion did not start when the Supreme Court abandoned constitutional protection for the right to have an abortion in Dobbs v. Jackson Women’s Health Organization in June 2022 – but the decision did prompt referendums at the state level about whether abortion should be permitted or not.

Eighteen states, from Alaska and Arizona to Wyoming and Washington, allow voters to directly amend a state constitution through ballot measures.

Ballot measures – or referendums – could show the power of people’s direct vote in determining abortion law at the state level.

During the November 2022 midterms, voters added protection for the right to get an abortion to constitutions in California, Vermont and Michigan. Kentucky voters were asked a reverse version of this question – whether the state constitution should bar abortions. They said no.

Kentucky’s vote is similar to an August 2022 referendum on abortion that was held in Kansas. Fifty-nine percent of people in Kansas – a state with a history of anti-abortion policies and activism – voted to keep state constitutional protection of abortion rights.

As a scholar of reproductive health and justice, I think the referendum results in places often considered red or purple states, such as Michigan, Kentucky and Kansas, demonstrate just how varied and complex abortion beliefs and opinions are in the United States.

Ballot measures, perhaps in the short term, may provide one way to protect or restore the ability to get an abortion in states where the politics tend to skew conservative. Simply put, not all conservatives want to ban abortion.

The legal terrain of abortion has changed in the U.S. since Dobbs.

Abortion law is increasingly a state-by-state patchwork in which people can obtain an abortion along the east and west coasts, but people in parts of the South and Midwest are unable to do so in their home states at any point during pregnancy.

Following Dobbs, 17 states have banned abortion before viability, the point at which a fetus can live outside the womb, typically at around 23 or 24 weeks of pregnancy. Thirteen of those states, such as Alabama and Wisconsin, now ban abortion from the earliest moments of pregnancy.

Before Dobbs, 15 states had statutes or constitutional provisions protecting state-based abortion rights. These guarantees ensure that abortion will remain legal in the state no matter what the Supreme Court decides.

In the past few months, six states have passed so-called shield laws, which seek to protect health care providers from liability for providing legal abortions to out-of-state residents.

Shield laws are not just prophylactic measures. As I have written with co-authors David Cohen and Greer Donley, the emerging legal landscape will be punctuated by conflicting state policies on abortion, particularly as states seek to impose their policy choices as widely as possible, even across state lines. A Missouri bill introduced in the spring of 2022 proposed to do just that by giving private citizens the right to sue anyone who helps a Missouri resident have an abortion – regardless of where the abortion occurs.

Any state seeking to apply its laws outside of state borders may face constitutional problems – the U.S. Constitution guarantees the right to travel and prohibits states from burdening interstate commerce, for example, which could prove to be legal barriers to enforcing laws with extraterritorial effects. But these arguments are largely untested or underdeveloped.

The legislation that states pass post-Dobbs of course reflects differences in opinion about abortion itself. But in some places where abortion has been banned, or restricted, anti-abortion legislators may not reflect their constituents’ beliefs. The recent ballot measures reveal that.

A September 2022 poll demonstrated that 65% of those Americans surveyed believe Roe’s demise is a “major loss of rights.” That outcome aligns with polling that shows that, in a variety of conservative states, a majority of voters want some or most abortions to remain legal.

In Kentucky, the vote to keep open the possibility of state protection of abortion rights may send the same message as these polls. Ballot initiatives could also override the will of anti-abortion politicians who have had a hold on the issue.

Faith in ballot measures is a risky, and expensive, proposition. Expensive because, as the Kansas vote demonstrates, groups supporting opposite sides of the question have spent millions to convince voters of their positions. Risky because voting restrictions and gerrymandering may dilute the power of people’s votes in some places.

But votes in Kansas, Kentucky and Michigan might show the ability of abortion-rights advocates to marshal their funding and messaging to take abortion questions away from state legislators and place them in the voting box.