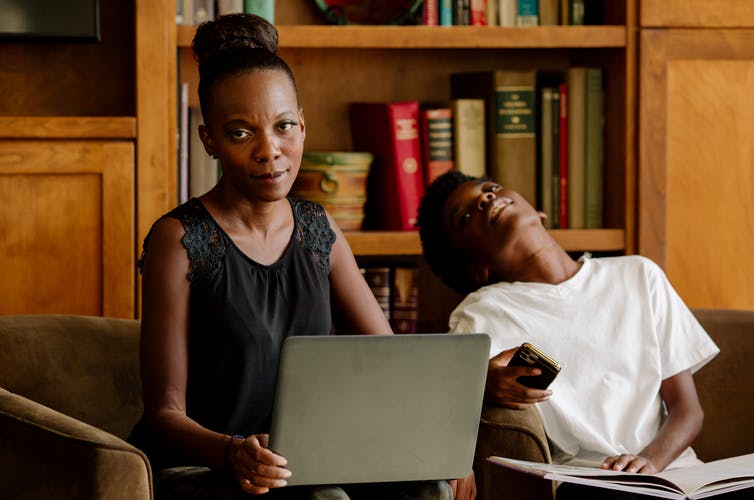 When “Mike,” the father of a ninth grade student, got a call from his daughter’s school, the first thing he asked was: “How important is this?”

“They said, ‘Well, it’s important,’” Mike told me during an interview for my research.

When Mike went to his daughter’s school to see what was the problem, school officials told him his daughter was being suspended for giving a boy a hug. He ended up missing out on some of his hourly wages to deal with the situation.

“I was like, ‘Nah. Not only am I missing out on some hours at work, I’m missing out on some important meetings, and also commitments that I have made, to come up here and talk about suspensions, a five-day suspension for giving somebody a hug,” Mike told me. “That’s one of the things that every time they call me, I always raise my voice about that. It’s been times where the school has suspended her, and I told the school, ‘Well, she can’t stay home with me. She doesn’t have nowhere else to go, so she has to stay at the school.’”

Mike’s dilemma is just one of dozens that I document in my forthcoming book, “Suspended: Punishment, Violence, and the Failure of School Safety,” which is set to be published on Oct. 19, 2021 by Johns Hopkins University Press. The book is part of my ongoing research about how Black families view school punishment and its impact on their daily lives. For my book, I interviewed 55 students from urban and suburban school districts throughout Michigan who received school suspensions, and their parents. I used fake names to protect their confidentiality.

As millions of students transition to in-person learning in the 2021-2022 school year, many may be wondering if an increase in school suspensions will follow. If suspensions do rise, my research suggests that could result in lost wages and even lost jobs for parents of Black students, who are suspended at substantially higher rates than white students.

However, as my new book shows, school suspensions also harm parents’ employment. Specifically, mothers and fathers told me that school suspensions led to a reduction in wages, job loss and even forced some of them to accept part-time work.

One such parent is Vanessa, the mother of Franklin, a 10th grade student, who told me she met with school officials to create an individualized education plan – known in schools as an IEP – for her son because of his attention deficit hyperactivity disorder, or ADHD, diagnosis. Instead of implementing the plan as they agreed, she said school officials continued to suspend her son for minor offenses related to his ADHD. During our interview, Vanessa shared one instance in which her son’s suspension cost her a job.

“I was working at [place of employment] as a social worker before this job, and at that time I was making $37 an hour,” Vanessa told me. “My husband and I were going through a little difficulty, as we were separated at that time. They were calling me from the school because Franklin was having a rough time. He was gonna get suspended. I said, ‘Well, I have to leave.’ When you’re a social worker at that job, you can’t keep calling in” to say you have to leave work.

[Over 110,000 readers rely on The Conversation’s newsletter to understand the world. Sign up today.]

I also learned that the legislative reforms policymakers have passed in recent years to reduce school suspension rates may not be working in some districts. For instance, several parents told me school officials did not use alternatives to suspension in the years after the reforms were enacted, even though they’re supposed to.

One such parent is Dana, whose son Philip, a ninth grade student, got a two-day suspension for fighting after a school official saw him wrestling with his friends in the gym. Dana says the boys were playing. In our interview, Dana expressed considerable doubt regarding the reforms. Dana told me she wished she would have been aware that school officials were supposed to try alternatives to suspension first.

“I wish I would’ve known that because I don’t think they [school administrators] been doing that,” Dana told me. “I feel like it could be effective, but I don’t feel like it was done with my son at all.”

In recent years, legislators in several states, such as Massachusetts in 2012, Illinois in 2015 and Michigan in 2016, have passed school punishment reform laws that were intended to reduce suspension rates.

When school officials don’t follow the reforms, it affects parents such as Linda, whose son Deshaun, a 12th grade student, received a three-day suspension because a video showed he was present in the restroom when a fight occurred. When school officials issued the punishment, Deshaun expressed that he entered the restroom before the other boys and did not participate in the fight. Although the video, which I reviewed, shows he was not fighting or talking to the other students, school officials upheld the suspension. Their argument was that all the bystanders should have contacted a school security guard instead of just watching the fight.

When I asked Linda about the effectiveness of the school punishment reforms, she stated:

“I don’t think they have implemented that at all. I haven’t seen that recourse. My son was very upset that he got suspended, ‘cause he was like, ‘I wasn’t even part of it.’”

In search of solutions

Though school punishment reforms were intended to reduce suspension rates, studies have found schools that enroll a large percentage of minority students are less likely to implement restorative justice practices.

In “Suspended,” I offer some potential reasons why school officials resist implementing the discipline reforms. For example, some school officials told me the reform guidelines did not recommend a course of action for administrators who violated them and continued to issue suspensions.

I also express the need for stronger legislation, emphasizing restorative justice as a means to reduce suspension rates and increase school safety.