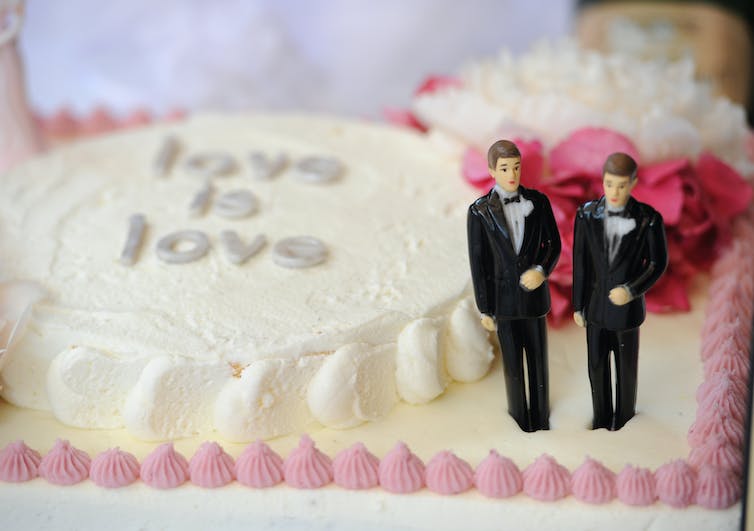 The U.S. House of Representatives approved the the Respect for Marriage Act – a law that codifies both interracial and same-gender marriage – on Dec. 8, 2022.

President Joe Biden is set to sign the bill into federal law shortly after the House vote. This will protect the right to same-gender marriage, which is often referred to as same-sex marriage.

Many leaders of major LGBTQ+ rights organizations have praised the Respect for Marriage Act. For example, Kelley Robinson, president of the LGBTQ+ advocacy group the Human Rights Campaign, said in November 2022 that the act will allow “the 568,000 same-sex married couples in this country … (to) breathe a sigh of relief that their marriages will be protected from future attacks.”

However, the Respect for Marriage Act also has various limitations that have not received a lot of public attention. As a public policy scholar with a focus on LGBTQ+ issues, I’ve noticed at least three major shortcomings related to this imminent law. And as such, I don’t necessarily expect it to lead to legal protection and equality for all.

One key issue is that anti-LGBTQ+ laws in conservative states could undercut the Respect for Marriage Act. The act also provides an exemption for religious nonprofits. And finally, it does not fix a long-lasting problem that penalizes the marriages of people with disabilities – regardless of their sexuality.

First, a bit of background

In 2013, the Supreme Court ruled that part of this law was unconstitutional in the case, U.S. v. Windsor. In 2015, the court also issued another ruling, Obergefell v. Hodges, which required all states to license and recognize same-gender marriages.

But concern about the court’s precedent on same-gender marriage was ignited after the Supreme Court made its June 2022 ruling in Dobbs v. Jackson Women’s Health Organization, which overturned the federal right to an abortion.

Supreme Court Justice Clarence Thomas issued a concurrent opinion alongside the Dobbs v. Jackson ruling. In it, he wrote that since abortion rights are not protected under the 14th Amendment – which provides people with “equal protection under the laws” – the court should also review several past cases, such as ones that affirmed the rights to contraception and same-gender marriages.

Because of this, Democratic and Republican legislators fast-tracked the Respect for Marriage Act through Congress in the fall of 2022.

Among other things, the Respect for Marriage Act requires all states to recognize marriage licenses from other states.

Some legal experts have noted that the conservative-leaning Supreme Court could overturn its previous rulings on marriage equality. In that case, states could try to deny marriage licenses to interracial and same-gender couples by passing new state laws.

If that happens, these states would have to recognize same-gender marriage licenses from other states where it remains legal. But states could still pass and enforce a racist or anti-LGBTQ+ measure that restricts access to marriage licenses there.

In that instance, the only way some couples could have their marriage recognized at home would be by traveling to another LGBTQ+ friendly state to get a marriage license – similar to how some people now travel out of state to get an abortion. This scenario would almost immediately result in a flurry of lawsuits at the state level.

It gives exemptions to religious nonprofits

When the Senate passed the Respect for Marriage Act on Nov. 29, 2022, the bill had a new religious liberty amendment added to it. While this concession was a draw for some Republican legislators, it creates some notable exemptions.

This language codifies the rights of religious nonprofits – including faith-based institutions, mission organizations, religious educational institutions and others – to not celebrate or, in some instances, recognize a marriage that conflicts with their faith.

In doing so, such organizations are allowed to deny “services, accommodations, advantages, facilities, goods, or privileges for the solemnization or celebration of a marriage.”

In short, religious institutions could still refuse to host or officiate wedding ceremonies or to provide services, on the basis of religious liberty.

This exemption follows the Supreme Court’s 2021 ruling in Fulton v. City of Philadelphia. In that case, the court unanimously decided that a Christian adoption agency in the city could refuse to work with a same-gender couple.

Currently, the impact that this clause of the Respect for Marriage Act could have on LGBTQ+ rights remains to be seen. Even so, this builds upon a longer history of religious liberty arguments that have been used to deny rights to same-gender couples, transgender people, women and others.

It doesn’t ensure marriage equality for people with disabilities

Finally, the Respect for Marriage Act does not explicitly protect people with disabilities, who still do not have access to marriage equality.

While the Americans with Disabilities Act provides access to public accommodations, it does not prohibit this marriage penalty. This means that people with disabilities generally lose their Social Security, Medicare and Medicaid benefits if they marry a nondisabled person.

While the Respect for Marriage Act repeals the Defense of Marriage Act, it will not repeal these marriage penalties from federal law.

Advocates are calling for proposed legislation, such as the Marriage Equality for Disabled Adults Act. This would remove this marriage penalty from federal law. Although disability rights activists continue to push for legislation to undo this penalty, the bill has been sitting with the House of Representatives subcommittee on health since January 2022.

The Respect for Marriage Act is an important win for interracial and same-gender couples, as it will codify the right to marriage into federal law. However, it is important to remember what this bill does not do.

The limitations of the Respect for Marriage Act – including no restrictions on discriminatory state laws, the presence of religious exemptions and the unacknowledged needs of people with disabilities – remain important to consider.