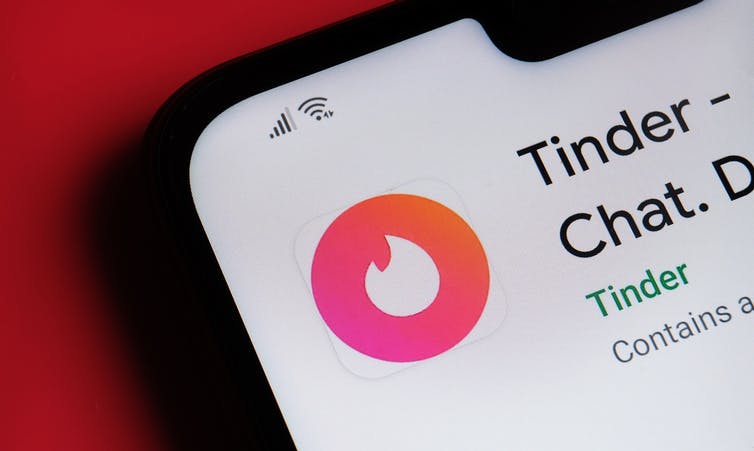 In the chart-topping Netflix documentary The Tinder Swindler, three women describe how they were defrauded by convicted conman Simon Leviev (who was born Shimon Hayut) after meeting him on the dating app.

The film gives a detailed and deeply personal account of how Leviev used Tinder to connect with his victims and ultimately swindle them out of hundreds of thousands of dollars.

I have been researching romance fraud for more than a decade. I have heard the painful and traumatic stories of hundreds of victims. While each story is unique, there are common factors, and some wider lessons to learn.

The Tinder Swindler is a powerful example of what can go wrong, but what does it teach us about romance fraud, and how can you avoid becoming the next victim?

What is romance fraud?

Romance fraudsters use the guise of a personal relationship to exploit their victim’s trust and gain a financial advantage (or sometimes, as ASIO this week warned, to access private or classified information).

It typically happens online, through a dating website or app, or social media platform. In many cases, the victim and offender never actually meet. However, as The Tinder Swindler shows, it can also happen in face-to-face relationships.

Romance fraudsters use a range of skilful grooming techniques, social engineering practices and psychological abuse tactics to gain compliance from their victims.

Leviev successfully manipulated several women by posing as the son of a diamond magnate, before claiming his family was being violently threatened and asking his victims to take out loans on his behalf to help deal with a purported security emergency.

Each of his actions was deliberate and purposeful, and is reflected across known offending patterns more broadly. Here are some typical tactics, all of which were used by Leviev:

Why do victims send money?

Watching from the safety of your living room couch, it’s easy to say “I wouldn’t go along with that”. But we must not underestimate a skilled offender’s ability to identify a weakness or vulnerability and exploit it mercilessly.

Using surveys with victims and non-victims, research has revealed a handful of traits associated with falling victim to romance fraud. Crucially, people with higher levels of romanticised beliefs, or who believe in the idea of “true love”, are more likely to become victims.

Several victims I spoke with could identify a particular reason that prompted their initial decision to engage with an offender. It may have been the loss of a previous relationship or a change in life circumstances (such as retirement or children leaving home). In many cases, a split-second decision to swipe right on a profile, or respond to a friendly message, changed their lives forever.

Someone’s level of vulnerability to fraud is not static; it can change on a monthly, weekly or even daily basis. Many victims would not have been deceived had they seen the message at a different time. Offenders target hundreds of victims in the hope of a single success.

My research has also found many offenders use psychological abuse techniques similar to those commonly found in domestic violence. Offenders might prevent victims from communicating with family and friends, bombard them with messages to monopolise their attention, or verbally abuse them to make them feel worthless. All these tactics impair a victim’s ability to think clearly about their situation or seek help.

No victim wakes up in the morning thinking “I am going to give away all my money today”. Instead, it’s the result of a painstaking grooming process. Offenders, having earned their victim’s trust, will often create realistic-looking contracts, bank statements or official letters to justify their requests for money.

They will typically depict these requests as both urgent and secret, as in the case of Leviev’s “security emergency” in which he claimed to be attempting to negotiate business deals while in hiding. This tactic reduces the victim’s ability to respond rationally or seek outside advice.

Victims of romance fraud suffer a wide range of negative impacts, including shame and social stigma. They are often blamed and held responsible for their financial losses, and this stereotyping makes it less likely they will report such crimes.

How can I prevent it happening to me?

Online dating is fraught enough without having to worry about financial fraud. It is hard to know someone on a dating app is really who they say they are.

Current fraud-prevention advice focuses on taking the relationship into the real world as soon as you feel ready, and never giving money to someone you haven’t met face-to-face. But in The Tinder Swindler, this advice is redundant because Leviev, like many offenders, had curated a real-life persona that matched his digital profile.

The truth is that a determined enough fraudster can extend their online lies into the offline world. Meeting someone in person, researching their background, and doing a reverse image search on their profile picture is all good advice – but it’s not foolproof.

Ultimately, fraud is almost always about money. So consider the motives behind any request for financial help, and never send money you can’t afford to lose. In 2020, Australians lost more than A$131 million to romance fraud. It’s a heavy price to pay for chasing true love.

If you or someone you know has been a victim of romance fraud, you can report it to ReportCyber. For support, contact iDcare. For prevention advice, consult Scamwatch.