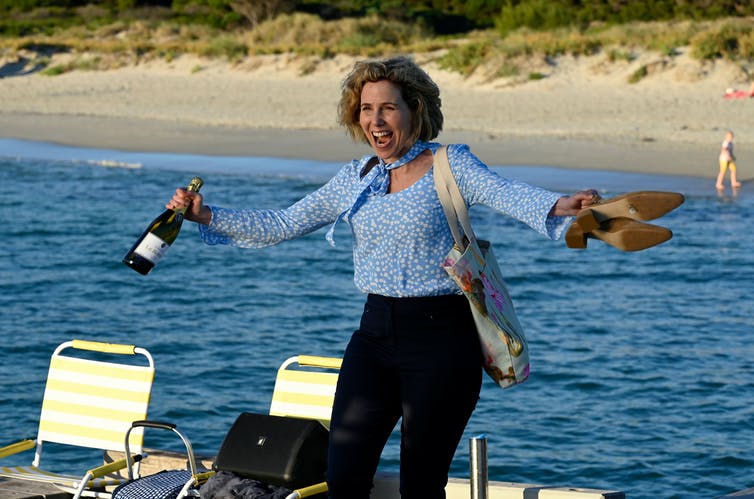 Australian writer and director Renée Webster’s new film How to Please a Woman turns much of what we think we know about sexual desire – especially for older women – on its head.

How to Please a Woman features 50-something Gina (Sally Phillips), who hasn’t had sex with her husband (Cameron Daddo) in over a year because he is no longer interested in sexual relations – with her or anyone.

Gina’s main source of intimacy comes from the regular beach swims she has with a group of three women (Tasma Walton, Caroline Brazier, and Hayley McElhinney) and their changing-room conversations that cover everything from peeing on jellyfish stings to the multipurpose use of coconut oil, including as a natural lubricant.

When Gina’s friends rent a stripper (Alexander England) to dance for her on her birthday (a much more intimate present than the two $50 bills she receives from her husband), and he offers to do anything for her (“Anything?” “Totally …”) she asks him to clean her house.

Realising the pleasure she experienced having her house cleaned by a shirtless, handsome man, Gina starts her own male cleaning business and her swimming crew become her first clients.

But they want more than their houses cleaned.

The sexual desire of women over 50

One of the strengths of this film is the sensitive way it represents the different desires of individual women. After all, the title of the film is How to Please a
Woman not How to Please Women.

For Gina to ensure her clients receive the pleasure they want, she meets individually with them and writes down their preferences. One woman wants to take it slow and start with gin and tonic. Another woman does not want her breasts touched. A third woman wants a very specific orgasm: she does not want just any orgasm that sneaks up on you, but one you ease up to and pull away from, ease up to and pull away from until total annihilation. Another client says that after several bookings with men she is starting to feel all kinds of things, so she wants to book a session with a woman.

It is rare to see in popular culture a range of mostly older women being frank about what gives them sexual pleasure and to see how their desire become more adventurous and diverse. Sadly, the sexual desire of women over 50 is often unrepresented, misrepresented, and/or shown as comedic.

The socially transmitted disease of ageism

According to Foley, Kope & Sugrue,

The greatest barrier to a woman’s sexuality in midlife is the socially transmitted disease of ageism.

Older women are represented as asexual and past it. They are “cougars”

Advertisement
or ageing femme fatales, like Blanche Du Bois in Tennessee William’s A Streetcar Named Desire, who set a tone for generations as a figure of fun whose desires are twisted, ridiculed, and ultimately punished.

Older age is by far the largest developmental human period plagued by misconceptions and stereotypes, kept alive by incessant jokes.

And no gender absorbs these jokes more than the female. Sexiness is equated with youth, and older women and their sexuality are made invisible. When older women are represented in popular media, their sexuality is often not shown or is aligned with deviance, such as in the relationship between Darlene and Wyatt in Netflix’s highly-acclaimed Ozark.

Depictions in media trivialising desirous or sexually active older women, or women who seek sex outside of loving and steady relationships as abnormal, contribute to negative stereotypes and to judgemental attitudes about older sexuality.

Fortunately, we are starting to see the lives of women over 50 appear more positively in stories on television, recent examples including And Just Like That the reboot of Sex and the City, and the hugely popular Netflix comedy series Grace and Frankie – and in films like It’s Complicated and Girl’s Trip.

The tone of these stories plays more for laughs, though, while How to Please a Woman balances between comedy and drama. As director Renée Webster says,

The best comedy comes from truth and a little bit of pain.

How to Please a Woman shows older women’s sexual desire as respectful and tender for both women and men, even though it is set within a comedy.

But the women aren’t being laughed at, they’re the ones laughing. This depiction seems new and significant. Stories impact and inspire relationships and images about ageing and sexuality influence individual behaviour.

Webster herself says she is “starting to get unsolicited texts of my friends’ husbands vacuuming the carpet and hearing from people that they took something home from the movie, and it opened up some new conversations for them.”

Female sexuality is seen as part of a rich fabric of women’s lives, not its single orgasmic culmination. As Steve (Erik Thomson) says in the film while eating a croissant, “one is never enough.”