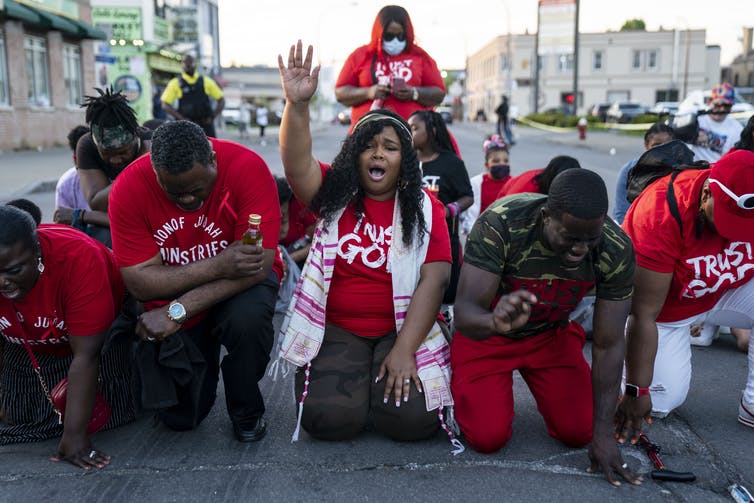 Eighteen-year-old Payton Gendron drove three hours from his home in Conklin, New York, to the Tops grocery store on May 14, 2022, and shot 13 people – most of them Black – killing 10 shoppers. Gendron’s gun had racist expletives written on it, and his 180-page online manifesto also repeated key elements of replacement theory.

This conspiracy theory, with roots in French nationalism of the 20th century, falsely warns that Western elites and Jews are bringing immigrants into a country to replace white people.

Since the shooting, several Republican politicians and commentators have used language that echoes this idea.

For example, Missouri Senate candidate Eric Schmitt, the state attorney general, said in May that Democrats are “fundamentally trying to change this country through illegal immigration.”

As scholars of white supremacy, white nationalism and extremism, we think it is important to understand what replacement theory means and how it shapes various white supremacist conspiracies, which motivate violent extremism.

Our research shows that this once-fringe theory has been gaining traction in the U.S. over the past few decades. It is necessary to understand the various elements that lead people to commit domestic violent extremism in order to stop it from happening. Here are three key points about replacement theory to keep in mind.

What is replacement theory?

Those who believe in replacement theory think there is an organized, conspiratorial effort across all levels of society to establish a “great replacement” of white people, white civilization and white culture.

For those who accept this false idea, the threat poses an existential danger to white identity and society.

Four out of 10 Americans identify as nonwhite, and the numbers of white people in the U.S. are expected to continue to decline, according to U.S. Census projections.

That ultimately means less influence and power over time for white people. Replacement theory believers think that they must correct the declining influence of white voters and white identity through whatever means they can.

One key element of replacement theory targets immigrants, and the belief that immigrants are part of a plot to replace the political power and culture of white people living in Western countries.

But the theory isn’t just about immigrants. Like the rest of white supremacist ideology, replacement theory also extends to Jewish people and Black people, seeing them as inferior and a threat to white people. The Buffalo shooter targeted victims in a predominantly Black neighborhood, and because they were Black.

What’s the history of replacement theory?

Replacement theory traces back to the early 20th-century writings of French nationalist Maurice Barres, who warned of a new population of immigrants that would take over and “ruin our homeland.”

The idea of a Jewish conspiracy to dominate the world was articulated in the antisemitic document “The Protocols of Elders of Zion,” first published in 1903 in Russia, and then moving west into Europe and the U.S. Replacement theory also guided the Nazis’ genocide of 6 million Jewish people during World War II.

In the 1960s and 1970s, many American white supremacists, like Klu Klux Klan leader Thomas Robb, reiterated replacement ideas in their racist political advocacy. White supremacists generally believe white people are superior to all other people.

In the 1980s, Klu Klux Klan leader David Duke, white supremacist Don Black and others centered conversations about replacement theory in the U.S. on immigration and the idea that immigrants will reshuffle demographics, eventually replacing white people.

Throughout the 1990s, racist skinhead groups and the growing online networks of white supremacists also promoted variations of the replacement theory to justify their politics and violence.

Around this time, the internet became a main forum for recruiting more white supremacists. And one of the common ideologies shared across online groups and forums was a replacement narrative – now closely tied to immigration.

Many white supremacist and nationalist groups and leaders in the U.S. continue to embrace replacement narratives. This conspiracy theory has become a standard element of white nationalism that motivates violence in the U.S. and across the globe. A shooter who killed at least 50 Muslim people at mosques in New Zealand in 2019, for example, wrote about an alleged “assault on European people.”

Is this now gaining popularity in the U.S.?

Conspiracy narratives, like the replacement theory, often find fertile ground during a period of cultural change.

As the U.S. population becomes more diverse, replacement narratives have moved from the margins of extremism into the mainstream.

A May 2022 Associated Press public poll found that about 1 in 3 adults in the U.S. “believes an effort is underway to replace U.S.-born Americans with immigrants for electoral gains.”

The Buffalo shooting is only the latest deadly incident in which a violent perpetrator was motivated by the replacement theory – and it is unlikely to be the last. The shooter’s decision to livestream his rampage could motivate other extremists to hurt others, some experts say.

The violent extremist who attacked the Tree of Life synagogue in Pittsburgh in 2018 targeted Jewish people and killed 11. The shooter in the attacks at a Walmart in El Paso, Texas, in 2019 wanted to target Hispanic people, and killed 23.

The replacement theory also featured during a white supremacist “Unite the Right” rally in August 2017, when hundreds of white nationalists protested the removal of a Confederate statue in Charlottesville, Virginia. They marched and chanted, “You will not replace us” and “Jews will not replace us.” A 21-year-old white supremacist also drove his car through a crowd of counterprotesters, killing one woman and injuring dozens.