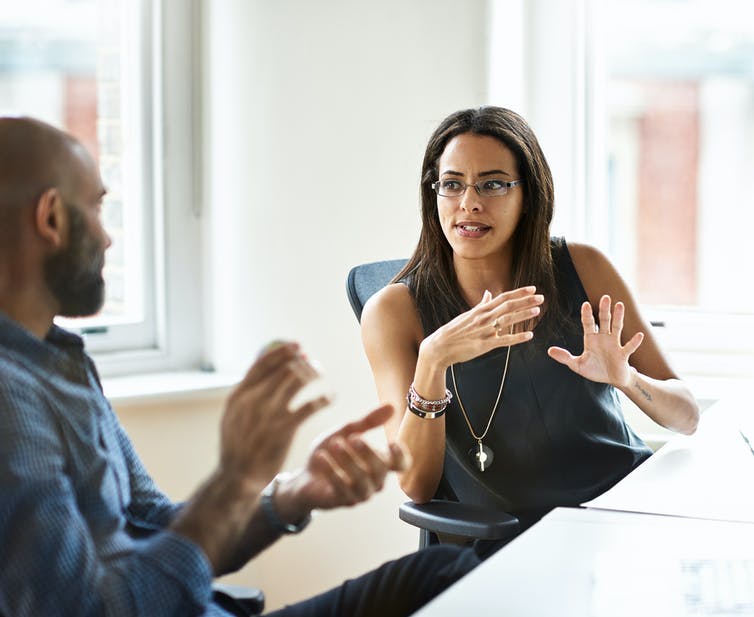 Women and groups advocating for gender equality are increasingly urging men to become allies in the fight.

Research has shown that in the absence of male support, women have to shoulder the burden of battling routine workplace sexism such as misogynist humor and microaggressions on their own. This can lead to a sense of isolation, stress and exhaustion.

But what difference can one un-sexist man make?

My colleagues and I had a hunch that the actions of individual male allies – even through simple acts such as highlighting the strengths of female colleagues or checking in on their well-being – might serve as a counterweight to the negative effects of everyday sexism. But not only that, we decided to study how that might impact men as well.

My colleagues and I tested these hunches in a new study published in the journal Psychology of Men and Masculinities.

We recruited 101 pairs of male and female colleagues employed in male-dominated departments across 64 research universities in the United States and Canada. We asked department heads to distribute our survey to female faculty members, and we then invited the women who responded to nominate a male colleague they work with regularly to take a companion survey.

We asked the women to what extent the male colleague they nominated behaved as an ally, such as by taking public stances on issues facing women and standing up when he sees discrimination. We also asked women if they felt like the colleague appreciated them – which is seen as a sign of inclusion – and how enthusiastic they felt working with him.

We asked the men to what extent they thought they behaved as allies, such as by reading up on the unique experiences of women or confronting sexist colleagues. We also wanted to know the extent to which they felt their support for women helped them “do better things” with their lives and acquire new skills that help them become a “better family member.” All answers were reported on a scale.

In other words, having men as allies in male-dominated workplaces seems to help women feel like they belong, and this helps them function enthusiastically with their male colleagues on the job.

This pattern has important long-term implications. If women feel energized and included, they might be more likely to stay with their employer – rather than quit – and strive to change a sexist workplace.

Men who were more likely to act as allies to women reported proportionately higher levels of personal growth and were more likely to say they acquired skills that made them better husbands, fathers, brothers and sons. This tendency suggests the possibility that being a male ally creates positive ripple effects that extend beyond the workplace.

Despite these promising results, our research has a few caveats.

Our study found men and women often have differing perceptions of who is an ally. For example, 37% of women whose male colleagues saw themselves as strong allies disagreed with that assessment. And just over half of the men who were perceived as strong allies by women didn’t see themselves that way.

Our findings are also limited given the small sample size. And we don’t know what the men who identified themselves as allies have actually done, if anything, to help women. But that may be somewhat beside the point.

Ultimately, even men’s mere signaling that they want to be good allies is an important first step toward a shift in the way many men have historically treated the women in their lives. We believe it also leads to more workplace equality.

When women perceive men as supportive colleagues, it makes them feel more integral to the workplace. This suggests a good starting point for men who want to be allies: find more ways to express that support at work.