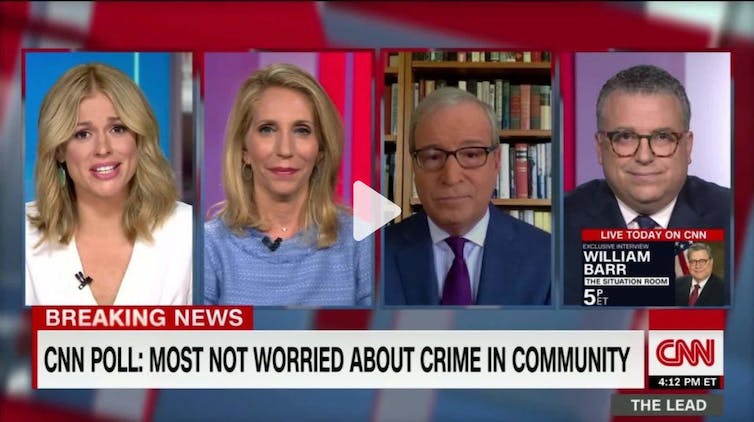 My colleagues and I used artificial intelligence to analyze hundreds of thousands of dialogues on cable news programs in order to better understand the nature of interruptions in political discussions. We found that women get substantially fewer opportunities to speak in those settings than men, and perhaps as a result they tend to interrupt more often than men.

Analyzing interruptions at this scale provides meaningful insights into subtle conversational dynamics and how they vary across race, gender, occupation and political orientation. In addition to gender differences, we found that across CNN, Fox News and MSNBC, conversations between people who hold opposite political beliefs are riddled with far more intrusive and unfriendly interruptions than those between people who share a political affiliation.

I’m a computer scientist who uses AI to study social science questions. In collaboration with student AI researchers from Carnegie Mellon University, we developed AI methods that reliably distinguish intrusive and unfriendly interruptions from those that are benign. Intrusive interruptions aim to take over a conversation or stifle the speaker, and benign interruptions aim to support the speaker with helpful information or indications of agreement.

Through a year-long effort, we analyzed 625,409 dialogues containing interruptions found in 275,420 transcripts from the three cable news networks spanning January 2000 and July 2021. We found that female speakers on the networks got out an average of 72.8 words per chance to speak compared to 81.4 for male speakers. We also found that female speakers interrupted in 39.4% of dialogues compared to 35.9% for male speakers. However, the women had a better ratio of benign to intrusive interruptions than the men did: 85.5% to 75.4%.

Our AI techniques could be used to provide real-time interruption analysis of talk shows, interviews and political debates. Post-debate analyses revealed that during the third U.S. Presidential debate in 2020, Donald Trump interrupted twice as much as Joe Biden. Real time analyses can be useful to call out serial interrupters, inform the audience during the debate and perhaps help in ensuring civil discourse.

This result points to the deepening political divide in the U.S. previously documented in research on news consumption patterns, media portrayals of major issues such as policing, social media discussions of events and the language of partisan news audiences.

What other research is being done

Other researchers have been studying interruptions in political speech in other contexts than cable news broadcasts, including legislative speeches.

While interruptions have been extensively analyzed in social science literature for decades, our study used AI techniques to study interruptions at an unprecedented scale.

Interruptions could be categorized with more nuance than just considering them intrusive or benign. Our current methods are not robust enough to detect these nuances reliably.

Our analysis also suffers from selection bias because it only considers people who appeared in major news networks and thus probably wield considerable social influence. We do not know whether our results would generalize to broader groups, for example from male politicians to all men.