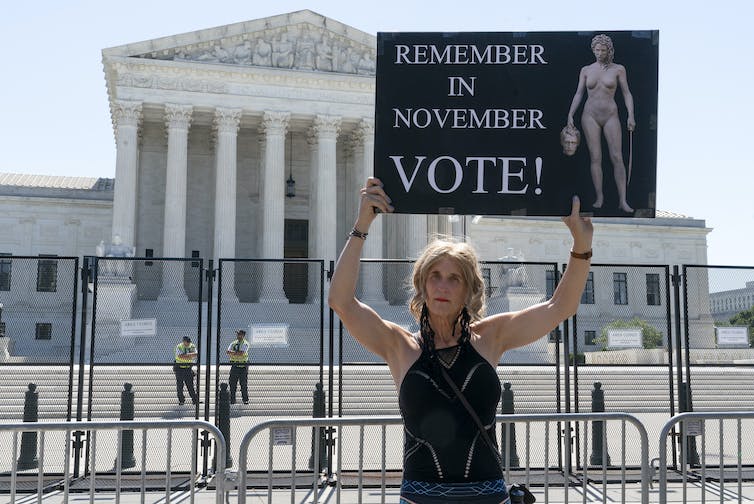 Following the U.S. Supreme Court’s ruling in Dobbs v. Jackson Women’s Health Organization and the wave of state-level abortion bans that followed, it might appear that anti-abortion activists could declare victory and go home.

However, from their perspective, a major threat still looms: Their tax dollars may be used to fund abortion in states where abortion is legal.

As it currently stands, several policies are in place that almost entirely prevent federal funds from being used to directly pay for abortion services. Since 1976, the Hyde Amendment has prohibited the public funding of abortion through Medicaid except in rare exceptions. In the years since, “Hyde-like restrictions” have been added to other federal healthcare programs, as well as to private insurance plans purchased through the health insurance exchanges established by the Affordable Care Act.

There are also restrictions on federal funds granted to organizations that provide reproductive healthcare for low-income women, like Planned Parenthood, such that these funds cannot be used for abortion services. Even so, anti-abortion activists insist that because money is fungible, any federal support for organizations that provide abortion services or counseling represents an indirect taxpayer subsidy to the “abortion industry.”

In the post-Dobbs world of the 2022 midterms, abortion debates are primarily focused on whether abortion will be legal, but anti-abortion leaders are also highlighting the implications of these laws for voters’ tax dollars.

This should not be surprising. In the course of my research on debates about taxpayer-funded abortion, I found that this threat has historically been used to motivate and mobilize anti-abortion voters. This message has especially resonated for those conservative evangelical Christians and Catholics who believe that when abortion is funded using their tax dollars, this makes them personally complicit in sin.

The U.S. Council of Catholic Bishops has long been a central player in advocacy campaigns to “stop taxpayer funding of abortion.” As one message encouraging voters to support this advocacy puts it, “Don’t let our government force you to pay for the deaths of unborn children.”

This concern resonates for Catholic Republicans, more than 7 in 10 who oppose the use of public funds for abortion, according to an analysis of national survey data that I conducted in 2021 with scholars Andrew Whitehead and Ryan Burge. This opposition is even stronger among Republicans who identify as born-again or evangelical Christian – between 84% and 90%.

But abortion funding bans also appeal to fiscally conservative voters who oppose welfare spending in general, whether or not they are morally opposed to abortion. Since the 1970s, anti-abortion leaders have argued that “funding bans protected taxpayers’ wallets as well as their consciences,” according to the legal historian Mary Ziegler. National survey data my colleagues and I analyzed suggests that this argument continues to resonate. Six out of 10 Republicans with no religious affiliation support abortion funding bans; so do between 14% and 17% of Republicans who support legal abortion.

Opposition to taxpayer-funded abortion, even more than abortion itself, is a thread connecting religious and fiscal conservatives within the Republican coalition.

Campaigns to prevent tax dollars from funding abortion have kept these anti-abortion activists and other Republican voters engaged and mobilized for decades, even when a ban on legal abortion itself seemed unlikely.

As one leader of an anti-abortion organization told me in a 2021 interview: “Ultimately, I think our focus should still remain on criminalizing [abortion]. … But I think in the meantime we also should oppose the taxpayer funding of it … just because it’s a winning strategy.”

This seems no less true post-Dobbs. As the midterms approach, I have found that Republican candidates and movement leaders are continuing to stoke fear about taxpayer-funded abortion in order to mobilize voters, especially religious conservatives.

A major issue energizing voters this cycle is the possibility that Congress might pass a bill codifying abortion rights. While the primary issue at stake is whether abortions would be legal nationwide, abortion opponents are quick to note that such a bill would also “force taxpayers to pay for them,” as the anti-abortion news website LifeNews.com put it.

National Right to Life president Carol Tobias warned in the September 2022 issue of the organization’s newsletter that “Proponents of the bill claim this bill would codify Roe v Wade. Don’t be fooled – it goes much, much further.” In particular, she writes, “tax dollars would flow to pay for abortion.” Jeanne F. Mancini, President of March for Life, warned that if this “extreme bill” is passed, it would “force taxpayers to pay for abortions nationwide — up until birth.”

Even in the absence of such a bill, abortion opponents are raising the alarm about existing Biden administration policies that allow public funds to be used for abortion services, like a new Pentagon policy that would “pay for service members to travel for abortion care.”

As reported by the Baptist Press, the Southern Baptist Ethics & Religious Liberty Commission raised concerns that “the interim rule forces taxpayers to fund the taking of preborn human lives.” Meanwhile, the Christian Right organization Concerned Women for America warned, “A baby has already been killed under this cruel ploy. … Not only that, but the Administration wants Americans to pay for it.”

Voters in several states are also directly deciding the fate of their states’ abortion laws in November 2022. In at least two of these states, anti-abortion leaders are highlighting the implications for voters’ tax dollars.

For example, in Kentucky, where a near-total abortion ban went into effect shortly after Dobbs, voters will decide whether to amend the state constitution to say, “To protect human life, nothing in this Constitution shall be construed to secure or protect a right to abortion or require the funding of abortion.”

Explaining why voters should vote “Yes for Life,” the chair of the campaign supporting the amendment led with its implications for taxpayers: “The constitutional amendment is very clear. It protects taxpayer dollars, and it makes sure there is not an interpreted right of abortion in the constitution.”

In Michigan, where a ballot measure called Proposal 3 would enshrine abortion rights, backlash from anti-abortion activists led by local Catholic organizations prominently features the claim that “If passed, Proposal 3 would result in taxpayer-funded abortion.”

Cities dedicating public funds to abortion post-Dobbs have also faced scrutiny in the lead-up to the midterms, especially from conservative religious groups.

In Philadelphia, for example, anti-abortion activists represented by the conservative Catholic Thomas More Society have filed suit against city leaders “for illegally using taxpayer money to pay for abortions.” Only weeks before the election, the Pro-Life Union of Greater Philadelphia rallied supporters to a hearing on the case, pleading “Don’t let Mayor (Jim) Kenney get away with it!”

Abortion debates are certainly not only about how abortions will be paid for. But journalists and scholars often pay far too little attention to anti-abortion activists’ persistent focus on the possibility that some abortions will be paid for with their tax dollars. If history and current research is any guide, this threat resonates with a diverse array of Republicans and will be used to mobilize voters in 2022 and beyond.

Gloria Dickson and Brianna Monte, undergraduate research assistants at the University of Connecticut, contributed research to this piece.