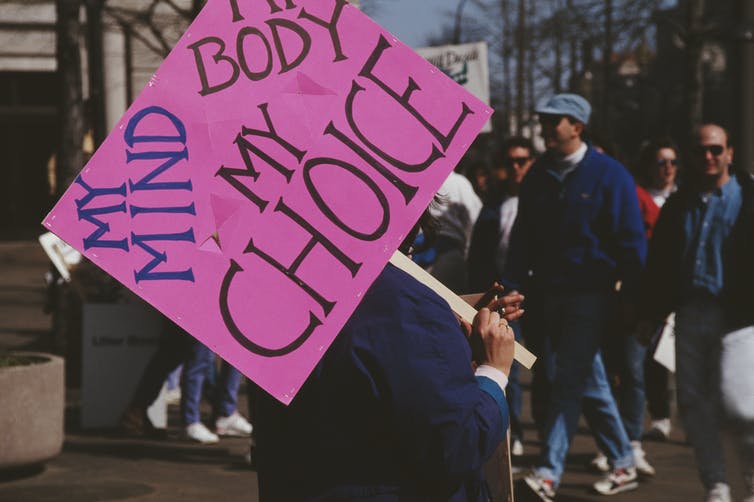 One of the blockbuster cases the U.S. Supreme Court will hear in its upcoming session is a challenge to Mississippi’s 15-week abortion ban.

Mississippi made clear that it aims to overturn the landmark Roe v. Wade decision, which in 1973 established a constitutionally protected right to abortion before fetal viability – when a fetus has developed to a point where it can exist outside the womb. In the context of a Supreme Court reshaped by anti-abortion interests, the case could set a new precedent, alarming abortion rights activists, some of whom will likely be outside the Supreme Court this fall holding signs emblazoned with “my body, my choice” – a go-to slogan for many in the movement.

I’m a philosopher and bioethicist. My research suggests “my body, my choice” was a crucial idea at the time of Roe to emphasize ownership over bodily and health care decisions. But I believe the debate has since moved on – reproductive justice is about more than owning your body and your choice; it is about a right to health care.

From rallying cry to hashtag slogan

It makes sense that “my body, my choice” gained steam in the years leading up to Roe v. Wade – a time when reproductive rights activists were fighting for the government to stay out of abortion decisions. Roe did just that by determining that abortion is a private choice between a pregnant person and their physician.

As a private matter, the Supreme Court determined that the government cannot interfere with one’s right to an abortion prior to fetal viability. In so doing, Roe established what philosophers call a “negative liberty,” or freedom from something. This freedom from interference was a crucial step toward reproductive rights in the U.S.

But in the decades since Roe, various states have taken steps to whittle away at the constitutionally protected right to abortion. “My body, my choice” frequently appears on signs at protests against abortion restrictions and in social media campaigns like #MyBodyMyChoice.

“My body, my choice” suggests that because people own their bodies, they get to control them. In the reproductive rights realm, it is a slogan meant to empower. But it relies on a history of self-ownership that goes back to the early days of capitalism and the rise of private property, reflected in the work of 17th-century English philosopher John Locke.

According to Locke, bodies belong to the individual – “every Man has a Property in his own Person,” he wrote. Locke argued that by mixing one’s bodily property with land through labor, one can take ownership of the land. But in practice land was consolidated among owners, not the workers. Locke even acknowledged that he, not his “servant,” took possession of the lands his servant labored. Ownership of the body did not equal empowerment.

Economics professor Anjum Altaf notes that landowners told workers that the workers “owned their bodies and could do with them what they chose.” But Altaf also indicates this supposed freedom of choice was meaningless when all the options were exploitative.

The point is self-ownership is not worth much if there are no good or even available options from which to choose. This was true for the laborer in Locke’s day, and it is true for the person seeking abortion care now.

In the years since the Roe decision, many state lawmakers have enacted legislation restricting abortion access despite constitutional protections.

Laws like mandated waiting periods for those seeking an abortion get enacted without evidence-based medical benefit. The same is true of targeted regulations of abortion providers, like the law forcing abortion clinics to obtain a permit to admit patients to a nearby hospital that was struck down by the Supreme Court last year.

Over the past decade more than 100 independent abortion clinics have closed due to restrictions, a trend accelerated during the COVID-19 pandemic. Clinic closures force those needing abortions to travel longer distances to find a provider.

States that actively protect abortion access for at least some time during pregnancy are overwhelmingly on the U.S.‘s east and west coasts. Accessing care in these states when it is restricted in one’s home state creates additional costs related to travel, child care and lost wages or time off work.

Many abortion-seekers must also pay out of pocket for their medical care. For 40 years, the Hyde Amendment has prohibited federal spending on abortion. This impacts those insured through Medicaid, which disproportionately enrolls women, people of color and LGBTQ individuals. Federal restrictions mean most states only allow Medicaid funding of abortion in very limited circumstances, if at all.

One could argue “my body, my choice” is meaningless if a person cannot enact their choice because they cannot afford health care, or if no provider is willing or able to provide the care that choice requires.

While Roe established freedom from government interference, abortion care – like any health care – requires freedom to do something. This is what philosophers call “positive liberty.”

The right to health care is a positive liberty: it is the freedom to seek care and take steps to protect health. It entails rights to access medical providers and treatment.

Current legislation in Congress, if enacted, would move beyond the “my body, my choice” debate and toward reproductive justice through positive rights to abortion care.

The Biden administration proposed a federal budget without the Hyde Amendment. The House passed it, but the legislation is thought likely to get blocked by the Senate.

Meanwhile, the Equal Access to Abortion Coverage in Health Insurance Act would make abortion care covered by federal and private health insurance like any other medical care. And the Women’s Health Protection Act would prevent states from enacting legislation undermining the constitutionally protected right to abortion and protect a federal right to abortion even if the Supreme Court overturns Roe v. Wade.

The original message of “my body, my choice” has been muddied by its recent appropriation for other causes. Opponents of mandated mask-wearing and vaccination – often including groups traditionally against abortion rights – have co-opted “my body, my choice.”

Whether talking about reproductive health or COVID-19, choices involving health care are not only freedoms from external control. They also rely on the ability to access necessary care. As abortion rights make their way back to the Supreme Court during an ongoing global pandemic, it is a good time to reconsider whether “my body, my choice” is the right slogan for a right to health care.